Please donate to give Rimba the West Sumatran tiger a future

Rimba the tiger urgently needs your protection. She and the other tigers of West Sumatra are at risk every day from poachers and conflict with humans. Your donation today will fund our new team of rangers to monitor Rimba and protect her forest. Without your protection, her future - and the future of all Sumatran tigers - is at risk! 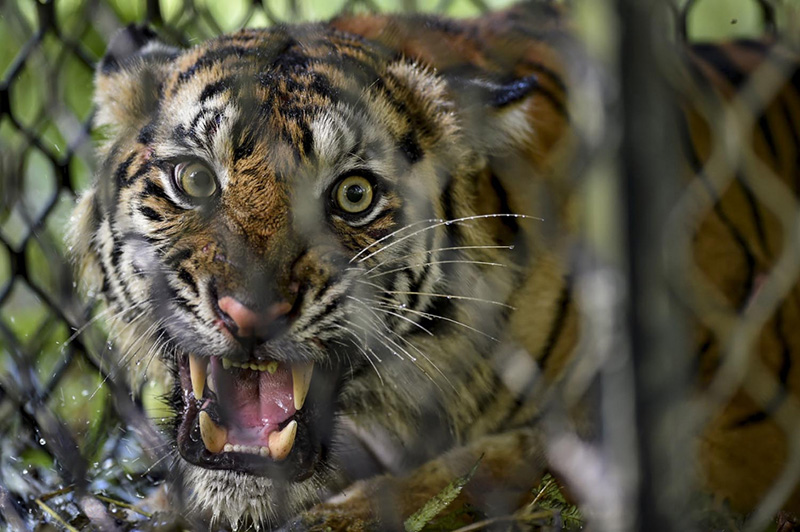 Rimba is a female tiger who has been spotted near farmland and villages, on the edge of the Nagari Sontang forest in West Sumatra. On their first training session, our new Tiger Team found pugmarks (tiger paw prints) as well as claw marks on trees. This is evidence that Rimba is hunting on the forest edge. Her proximity to humans poses a terrible risk for Rimba and her kind, especially as there has been an increase in conflict between humans and tigers in this region.

Local villagers are concerned about attacks on their livestock, and after a man was killed by a tiger last year, they’re even more afraid of tigers coming too close to humans. Human-tiger conflict is a major cause of tiger deaths. Until now, there has been very little education of communities living on the edge of the Nagari Sontang forest in West Sumatra.

Conflicts between humans and tigers in this area are increasing. As their forest is destroyed for agriculture, tigers have fewer opportunities for hunting. This sometimes leads to attacks on livestock, which leads to further conflict between tigers and humans. It’s a vicious downward spiral but our new Tiger Team can change the situation for these tigers. Rimba and the other tigers of West Sumatra can’t survive without them.

Earlier this year, there were reports of a tiger (picture aboved) confronting heavy machinery during land clearing at the forest edge. The tiger’s life was in terrible danger as it approached the machinery that was tearing up its forest. The local authorities were able to safely transport the tiger away from the site, but it’s just one example of the threats facing the tiny but critically important population of tigers in West Sumatra.

Your gift today will ensure our rangers are able to patrol the forest, remove snares and reduce wildlife crime, including poaching and the illegal sale of tiger body parts. Rimba is just one tiger, but with the Tiger Team patrolling her forest and looking out for her wellbeing, we have hope for the future of all Sumatran tigers. Even a small donation can make a large difference.

Will you please help us protect Rimba? Donate now and help give her a future

Our West Sumatran Tiger Team has been recruited and trained, but we urgently need your support to ensure they can patrol the forest for the rest of the year and into the future. The ultimate goal is a safe future for Rimba, her cubs and her entire species. But it’s only possible if we patrol and protect the forest they live in and educate local communities about how to live safely with tigers.